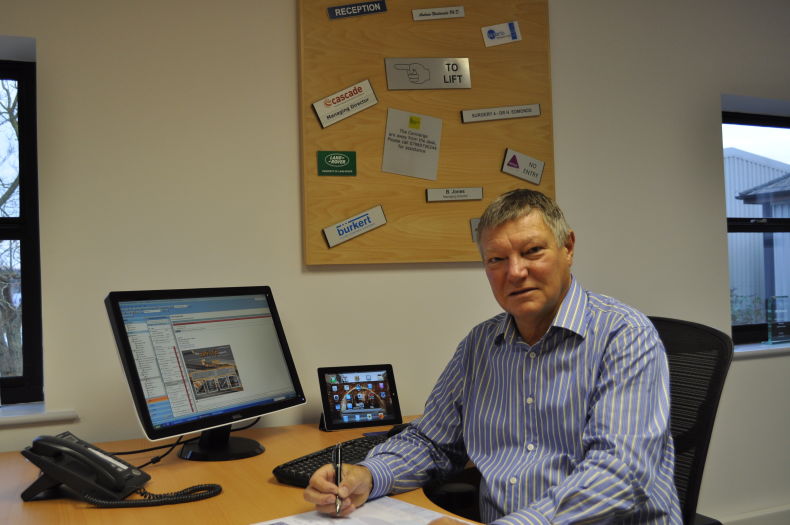 Managing Director, Martyn Wright was featured within personal profile in Ten Magazine, January this year. We are all very proud to see this feature published, here is the interview itself..

“I started my working life as an apprentice engineer with Rank Taylor Hobson and after three years transferred to sales demonstrations working with Mac (A J McGarry), a well known and respected figure within the engraving industry. This is where I trained as an engraver, attending exhibitions, running training courses and tackling many obscure engraving jobs.  Every job had to be done to perfection and I learned to understand the more complicated work that engravers have to handle and how to look at cost effective methods of providing solutions.  The company also gave me an insight into one man start ups and managing a business.

Another three years on I moved to Engraving Machine Servicing, working with Graham Walker and Ron Chapman who formed Pantograph Services. Two years later I left RTH and worked with a company in Jersey as a jobbing engraver, prior to setting up my own engraving business in 1976.

During this time I became a main supplier and assembler of company seals for Bristol based company, Jordan and Sons, the largest company formation agents in the UK.  They asked me to join them to set up a company seal manufacturing unit which I did in January 1979

By 1989 I was a company director responsible for company seal manufacturing and engraving, print and print finishing and a legal stationery sales department, with a combined turnover of 2 million pounds. I had developed a computer engraving machine for the sole use of engraving company seals which reduced staff by 50% and doubled turnover.

After ten years with Jordans, due to many changes in management structure, I decided to leave and establish my own business, Brunel Engraving Company

In February of 1989 I approached my local Clevedon trophy shop to provide a quotation for nameplates.  Two days later I received a call suggesting I purchase the business and in March of 1989 Brunel Engraving Company was formed.

Over the last 23 years Brunel Engraving has grown and developed.  Today we employ 22 local staff, we have moved to larger premises and we have increased our annual turnover to £1.2 million.

The business today is significantly different to that of 1989. Not only do we use rotary engraving we now also have laser engraving, chemical etching, anodic print, dye sublimation print, flatbed UV print and wide format UV print.
We also offer trophies and corporate awards where we utilise three engraving machines, two computerised and two glass engraving machines.

I don’t see other engravers as competitors, I look at them as companies in the same business and we are all striving to make a living. It is this view which has led me to offer all our services to other trophy shops and engravers on a trade basis, giving them the chance to provide a far wider range of products to their customers without increasing their costs.

My vision for the future is to grow the business over the next four to five years at which time I hope to take a step back, allowing a younger generation to drive the business forward while I use my experience to work as a consultant. I’d also like to enjoy more time with my family, particularly my grandchildren, and it would be great to travel more and to get more time on the squash court!" 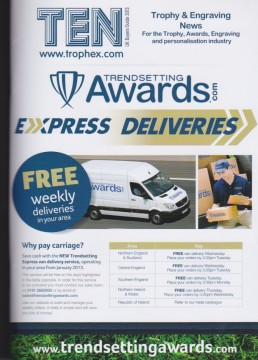 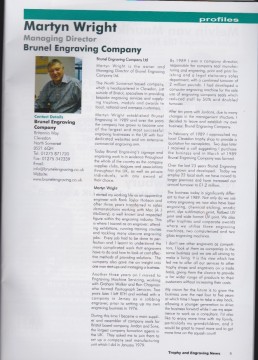 We use cookies to improve your online shopping experience and the service we offer. If you continue to use our website, we’ll assume that you agree to this. Read our cookies policy for more information.