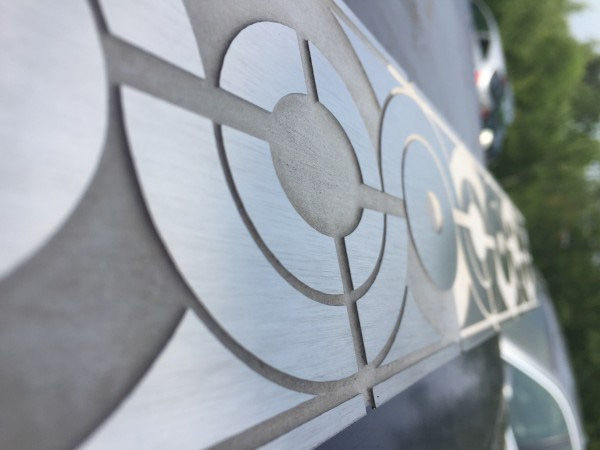 We were recently commissioned to engrave over 500 bronze and stainless components at Shakespeare’s New Place, a contemporary heritage landmark site in Stratford-upon-Avon, which opened to visitors on 20th August 2016.

The site, which was Shakespeare’s family home from 1597 until his death in 1616, has been transformed by The Shakespeare Birthplace Trust to mark the 400th anniversary of Shakespeare’s death. Designed to reveal a “window on the world of William Shakespeare for the 21st Century”, it features beautifully landscaped gardens and specially-commissioned artworks celebrating the famous playwright’s life and works. Over 18,000 people visited the site in the first month of its opening.

We individually engraved over 500 separate bronze and steel component parts in varying sizes of arcs and flat bars. The arced pieces featuring intricate pattern work which formed different sizes of circles had to match exactly and their thin borders had to be perfectly aligned. Some components took over three days to engrave due to their size, weight, the complexity of the image and depth of engraving.

Martyn Wright, founder and managing director of Brunel engraving commented that “we had to maintain total accuracy in the patterned pieces, as the design dictated that a fine border of 1mm ran around the arc and that the pattern in each arc matched perfectly at the join.”

“Some components required a 4mm engraving depth which made the process more complex. This was a detailed and time consuming job requiring intricate precision and attention to detail which our experienced, specialist engravers completed successfully and to schedule.”

“We are very proud to have made a lasting mark on this beautiful heritage site in Shakespeare’s home town of Stratford. It will attract visitors from all over the world for many years to come!”

If you wanted to make an enquiry about architectural or design work, please get in touch by emailing us on [email protected] or by calling 01275871720.

Specialist Engravers to Architects and Designers

We use cookies to improve your online shopping experience and the service we offer. If you continue to use our website, we’ll assume that you agree to this. Read our cookies policy for more information.